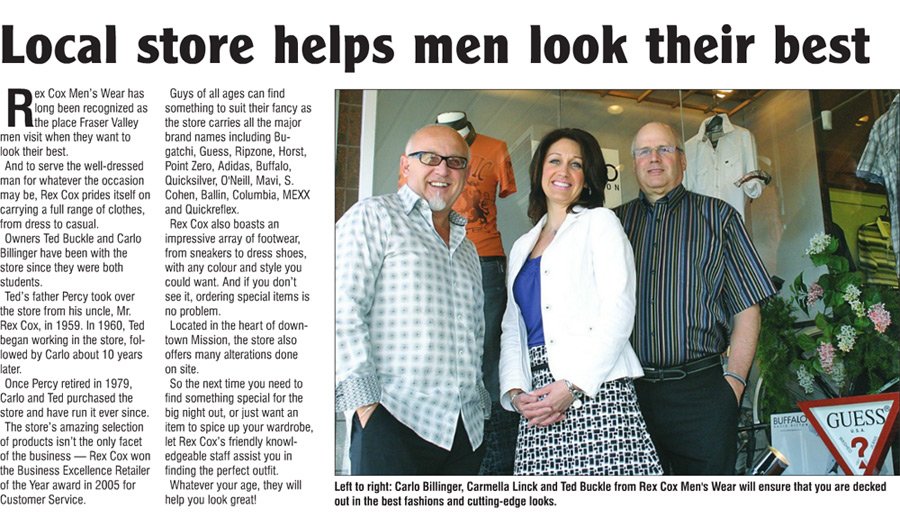 Rex Cox Men's Wear has long been recognized as the place Fraser Valley men visit when they want to look their best. And to serve the well-dressed man for whatever the occasion may be, Rex Cox prides itself on carrying a full range of clothes, from dress to casual. Owners Ted Buckle and Carlo Billinger have been with the store since they were both students.

Ted's father Percy took over the store from his uncle, Mr. Rex Cox, in 1959. In 1960, Ted began working in the store, followed by Carlo about 10 years later. Once Percy retired in 1979, Carlo and Ted purchased the store and have run it ever since. The store's amazing selection of products isn't the only facet of the business - Rex Cox won the Business Excellence Retailer of the Year in 2005 for Customer Service.


Guys of all ages can find something to suit their fancy as the store carries all the major brand names including Horst, Point Zero, Adidas, Buffalo, Quicksilver, O'Neil, Mavi, S. Cohen, Ballin, Columbia, Calvin Klein, and Quickreflex. Rex Cox also boasts an impressive array of footwear, from sneakers to dress shoes, with any colour and style you could want. And if you don't see it. Ordering special items is no problem.

Located in the heart of downtown Mission, British Columbia, the store also offers many alterations done on-site. So the next time you need to find something special for the big night out, or just want an item to spice up your wardrobe, let Rex Cox's friendly, knowledgeable staff assist you in finding the perfect outfit. Whatever your age, they will make you look great!